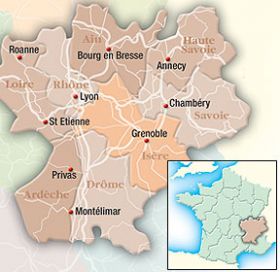 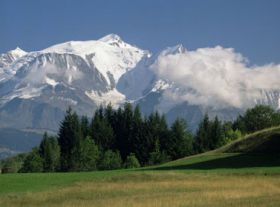 The name the Rhône-Alpes sums up the contradiction of this region - on one hand, in Rhone, Loire, Ain, Ardeche, Drome - the Rhone, a deep valley cut through the French countryside, and on the other, in Savoie, Haute Savoie, and Isere the French Alps, home to the highest peak in Europe, Mont Blanc.

The Rhone boasts thriving cities, medieval castles and sumptuous vineyards for considered delectation, whilst the alps bring a hedonistic natural adventure ground to the masses, with skiing, climbing, and alpine lakes being amongst the star attractions - but what ultimately makes this region so special is the way in which these two apparently opposing sides not only co-exist but actually compliment each other. Ultimately, its this diversity and completeness which makes the Rhône-Alpes one of Europe's most talked about destinations.

Mont Blanc was first climbed in 1786, but at this time it wasn't believed to be the highest mountain in Europe.

By road... Driving into and out of the region can be spectacular, but can also be problematic in bad weather due to the winding roads. The best way to drive is to stick to the motorways for as long as possible, even if it sometimes means doubling back to get to your destination.

By air... Lyon St. Exupéry airport has good connections throughout Europe, and is a hub for Easyjet. There are also airports with flights from the UK in Grenoble.

By public transport... The area, although mountainous, is still easily accessible by train, and the TGV from paris to Lyon only takes 2 hours. Trains also regularly arrive from Brussels and other European cities.