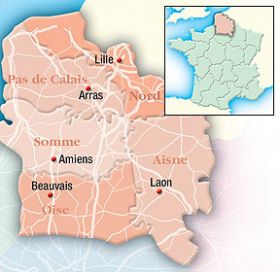 Due to its closeness to Great Britain, the Nord du Calais and Picardie regions are the perfect opportunity for a day trip - with cosy café-culture in Pas de Calais, gourmet gastronomy in Aisne, and blissfully deserted beaches in Somme by the bucket load; it offers everything anyone could need for a bite-size slice of French life.

But whilst they may be the best option for a short break from the UK, those who only pop over for the day risk missing out on the extraordinarily friendly people, the poignant memorials in Nord, and the artistic and cultural hot-spots in Oise, which make the region all the better for getting to know. Give the region a chance, and it won't be long before you can't imagine how you thought you could do it all in a lifetime, let alone one day.

Calais was the last part of France owned by England, and was only relinquished long after the 100 years war in 1558.

By road... Very easily accessible from the UK, thanks to its proximity and its ferry ports.

By air... Flights are available to Lille from London, although given how close it is, it often is quicker to hop in the car and take the ferry.

By public transport... There is a huge day-tripper business which means there are literally hundreds of companies who can organise coaches to the region, which most offering flexi-passes so you can choose how long you stay. The train from Paris is also possible, but this is a bit of a convoluted way to get there as there it is doubling back on yourself. The best way is on the ferry.