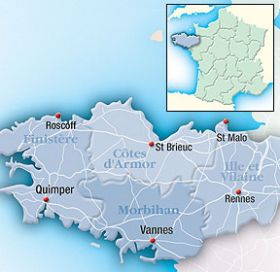 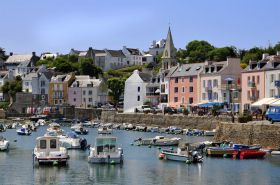 Situated at the far-flung tip of Western Europe, Brittany nevertheless attracts hoards of tourists throughout the year, and from the second you arrive you'll understand why. Surrounded on three sides by the sea, Brittany enjoys the best of the Channel and the Atlantic Ocean. Its 2800km coastline is blessed with beaches in Côtes d'Armor, rocky outcrops in Finistère and exquisite harbours throughout Morbihan, which form an ensemble the rest of France simply can't compete with.

Although the coast takes the lion's share of the limelight, Ille-et-Vilaine boasts postcard-perfect towns and natural wonders galore further inland. The dramatic Atlantic gives a wild feel to the region, but this is still France, and the harbour towns and medieval forts are just as captivating.

Brittany is home to more than 2900 protected monuments, making it home to one of the densest populations of monuments anywhere in the world.

By road... Brittany is very accessible by motorways and also by plenty of A roads, which offer a more scenic route. Driving from Britain is an easy option thanks to the well-served ferry network, which runs a range of routes, including Poole to Saint Malo in 4 ½ hours.

By air... As the second most visited part of France (only beaten to the top spot by Paris), it is not surprising that there are several companies flying direct from around the UK (Manchester, Birmingham and Newcastle amongst others) to the main cities in Brittany (Brest, Rennes and Nantes). But whilst some, such as Flybe, run all year round, many greatly restrict or cancel their service outside of the summer months

By public transport... With only one change in Paris, getting the train to Brittany is easy and quick, clocking in at 5 ½ hours. Prices can rise steeply in the summer, but if you can plan ahead and book early, the train can be a easy and cheap way to reach Brittany.