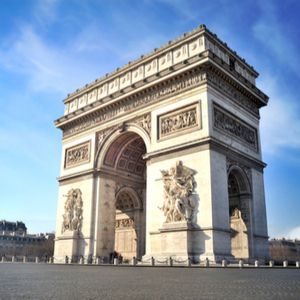 France is bursting with famous landmarks, many of which are designated UNESCO World Heritage sites. Sadly, when we think of French landmarks, we rarely get further than Paris. The Louvre, the Eiffel Tower, the Arc de Triomphe and the Sacre Coer just roll off the tongue. But what about some the ancient and downright fascinating features of France that reside outside of the capital? This article takes a tour of some of the most famous French landmarks, and just one of them is actually in Paris.

One of the most famous landmarks in Paris, the Arc de Triomphe is situated in the Place Charles de Gaulle towards the end of the Champs Elysees. The monument was built in honour of those who fought and died in both the French Revolution and the Napoleonic war. The structure was ordered by Napoleon in 1806 and was completed in 1836, long after his death. At the base of the famous monument lies the Tomb of the Unknown Soldier, a grave containing the unidentified remains of an unknown soldier to honour all those who fought and died in war without recognition.

The stunning Palace of Versailles lies just outside Paris in the former village of Versailles. The Palace started life as a hunting lodge, built by Louis VIII in 1624, and was gradually expanded until his successor, Louis XIV, turned it into the biggest royal palace in the world. Hoe to the French royal family and the government until the French Revolution, it is now a UNESCO World Heritage site and attracts visitors from around the world to witness the outstanding architectural features and internal opulence.

The Grotto of Massabielle is considered the most sacred site within the Sanctuary of Our Lady of Lourdes – the Roman Catholic pilgrimage site in the south of France. The Grotto is said to be the place where St. Bernadette had visions of the Virgin Mary, who pointed out to her a special spring in the ground and ordered her to drink from it. The spring is said to have healing properties and so draws visitors from around the world to drink from the spring and visit the holy location.

Another UNESCO World Heritage site, the Canal du Midi is one of Europe’s longest and widest canals at 150 miles long. It is considered a feat of engineering and, built in 1680, was said to be a key factor in the birth of the Industrial Revolution. It was built to facilitate faster and cheaper trade by cutting out the need for a long and arduous journey around Spain.

Developed by famous French architect Le Corbusier and Nadir Afonso in 1952 as the answer to a post-war housing shortage, Unite de Habitation is one of the first post-war communal living concept experiments in Europe. Designed to house vast amounts of people whilst nurturing a community feel, the building was designed to be a vertical ‘garden city’, a popular concept amongst artists, thinkers and architects in the post-war landscape. Architecturally cold and composed from steel, concrete and glass, the building is thought to be the initial inspiration behind the Brutalist movement. Designated as a UNECO World Heritage site in 2016.

La Chouette (The Owl) is the icon of Dijon. It is a stone relief sculpture, which is carved into the side of the church of Notre Dame. Legend has it that the owl brings good luck if visitors touch it with the left hand.