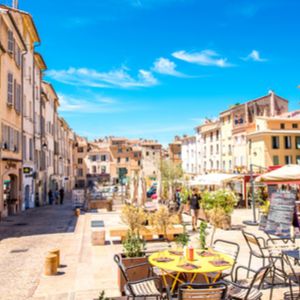 The South of France is a great place to visit. It has a wonderful climate, rich wildlife, a spectacular coast, chic resorts, beautiful scenery and astonishing history.It is a perfect French holiday destination, however, the difficult question is which of the many amazing sites and landmarks to visit. Spoilt for choice, from Roman remains to stunning natural landscapes to the flashy resorts of the Riviera, here are a few of the 'must see' sites.

Aix en Provence: This elegant, historic town has an impressive array of Renaissance buildings and is one of the South of France's most pleasing towns. It has been named 'the city of a thousand fountains'. Three of the best are situated on cours Mirabeau, Aix's main attraction. On one side are 17th and 18th century buildings with wrought-iron balconies; on the other are cafes - so much a part of the city's social life. The Old Town centres on the Place de l'Hotel de Ville, with its colourful flower market.

Canal du Midi: The Canal du Midi is the quintessential image of the South of France. It perfectly symbolises the rich history and the slow pace of life. A lazy day spent cruising along the Canal du Midi or walking along its tow path is must on any tourist itinery.

Carcassonne: Explore the fascinating medieval fortress at Carcassonne, the largest fortified town in Europe, it never fails to amaze. It crowns a steep bank above the river Aude, a fairy-tale sight of turrets and ramparts overlooking the Basse Ville below. People still live within the defences, and there are lots of shops and restaurants to explore in the narrow streets. Wander through the ancient streets of this captivating city before lunching on local specialities such as the classic cassoulet (meat and bean casserole). Stroll around the lower town (Villa Basse) to admire the 17th and 18th century town houses and good boutiques. The market (Tuesday, Thursday and Saturday mornings) has been held here since medieval times.

Nimes and the Pont du Gard: The Roman town of Nimes and the spectacular aqueduct that was built to bring water to its citizens, combine to form one of the great sights of France. They are 20kms apart so you can choose which to see first. At Nimes, the main 'must see' site is 'Les Arenes', the 2000 year-old amphitheatre. It's the best preserved Roman amphitheatre in the world. There are 3 tiers of stone steps inside, designed to seat around 20,000 and it is still in regular use for events. The Pont du Gard - this huge hone-coloured marvel strides across the River Gardon in three imposing tiers, constructed by the Romans around 19BC, and makes a fascinating site.

Arles and the Camargue: Roman Arles is the gateway to the mysterious and romantic natural wilderness of the Camargue, a marshy flatland famous for its exotic wildlife and its semi-wild white horses. Thousands of pink flamingos come to feed in the shallow water here, and evaporating sea water leaves vast crystalline saltpans.The small town of Arles is one of the most appealing of Provence, with Roman public buildings, including a well-preserved amphitheatre. There are many excellent museums and antiquities in and around the town. Arles is famous for its short but memorable association with Vincent van Gogh, who stayed in Arles for only 18 months yet during this time produced some of his most famous paintings, including the famous sunflower series.

Avignon: The grandeur of Avignon's medieval walled city, dominated by a huge papal palace, makes it an intriguing place to visit. Avignon is a charming city, with lots of bustling streets and squares. Around the town, you'll find stunning architecture, the best shopping along rue de la Republique and cafes at the Place de l'Horloge offering the chance to relax and watch the world go by. There are several museums to explore, and an essential stop is the Pont St Benezet - the Pont d'Avignon immortalised in song. The cheerful children's song about dancing on the bridge dates back to the 15th century. In the summer the town is the scene of the popular Avignon Festival.

Gorges du Verdun: France's version of the Grand Canyon is the deepest and most dramatic gorge in mainland Europe: an unmissble 21km of steep cliffs punctuated by breathtaking viewpoints. At the bottom run the clear green waters of the river which run out into the artificial Lac de Ste-Croix.The gorge was formed over millions of years by the River Verdon, and is one of the natural wonders of the world. The river powers a hydro-electirc plant, and is dammed below Moustiers, offering good opportunities for experienced canoeists. Short walks lead from many of the view-points, such as the zig-zag path from the Point Sublime, on the north side. There are plent of cafes to choose from in the cobbled squares of Moustiers-Ste-Marie. There are also lots of good viewpoints, where you can stop for a picnic and enjoy the panoramas.

Nice: one of the biggest cities along the Mediterranean coast and the capital of the Riviera, Nice is vibrant and buzzes with life. Sun seekers relax on parasoled loungers lining its pebbled shores and swim in the azure sea, bladers cruise the curved Baie des Anges (Bay of Angels) against a backdrop of palm trees along the Promenade des Anglais. Many splendid belle-epoque buildings line the broad Promenade des Anglais along the seafront. There's an old quarter to discover, where you'll find interesting little shops, cafes and churches, the famous Nice flower market, plus some of the top art galleries of the region. In the 19th century it became a chic winter resort, naming Queen Victoria among its illustrious visitors.

Just a taster of some of the many splendid places to see when on holiday in the South of France, but you will no doubt discover many of the myriad of other tantalising delights along the way.