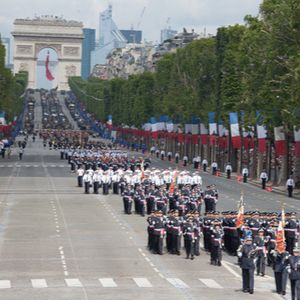 Few national celebrations encapsulate the French spirit like Bastille Day. La Fête Nationale (as it is formally known in France – Bastille Day is English only!), is an action packed day, filled with events, feasts, military parades and sometimes, moments of political significance. Whilst Bastille Day is celebrated around the world by French communities (including in London), it is in France itself, and particularly in Paris, where the real party takes place.

What is Bastille Day?

On 14th July 1789, less than a month after a civilian parliament of sorts had gained recognition by the King, the people of Paris became concerned about retaliation from the King’s army. In order to gain weaponry and gunpowder to defend themselves against attack, they stormed the Bastille, a fortress prison in Paris known for holding political prisoners and traitors to the King. Whilst the act was in itself fruitless to a large extent (there were only seven inmates at the time of the attack), this was the spark that lit the French Revolution and led directly to the rights that formed the foundations of the Republic.

Bastille Day today is a combination of celebrations that commemorate both the storming of the Bastille but also the history, achievements and significant moments in the life of the Republic – a national day to celebrate the Republic of France, rather than the memory of a single, pivotal event.

How is Bastille Day celebrated?

There are two kinds of celebration on Bastille Day. There are the formal celebrations, arranged by the authorities and filled with symbolic pageantry and a swelling of national pride, and then there are the raucous parties, indoors and out, where masses of people gather together and celebrate in style.

Formal celebrations include the annual military parade down the Champs-Elysées, fireworks around the Eiffel Tower, the Bal du 14 juillet costume party on the Place de la Bastille and the peculiar tradition of opening up fire stations to the public to give demonstrations, with a donation payable on entry.

Informal celebrations include huge communal meals, street parties and indoor parties, starting during the day and carrying on until the early hours of the next day.

Holidaying in France during Bastille Day

If you happen to be holidaying in France during Bastille Day, then be prepared to drop your original plans and join in the celebrations. No matter where you are in France, you will be involved in some form of public entertainment as France shuts down in its entirety to celebrate.

If you are in Paris, then forget travelling by Metro or getting a place in a good restaurant at a moment’s notice. Paris is positively heaving over Bastille Day, attracting French people from all over France and all over the World!

To join in the celebrations in Paris, make sure you are at the Champs-Elysées before nine if you want to get a good spot. The first event, the military parade, starts at 10am and the last, the fireworks, start just before 11pm.

Elsewhere in France, major towns and cities create their own, smaller versions of the events taking place in Paris, including military parades and fireworks, so matter where you are you won’t miss out.

Burgundy - the very heart of France

Top Family Attractions in the South of France

Is St Tropez still the jewel of the Cote d'Azur?